The state of Digital Transformation in 2019 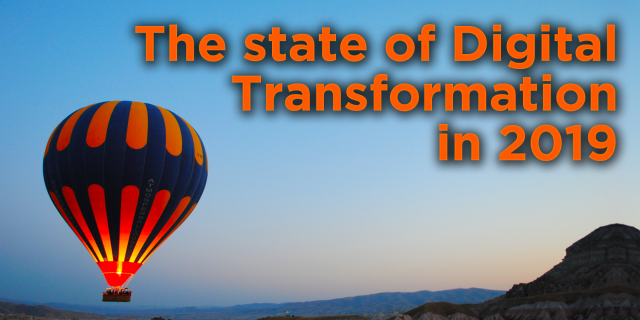 There are few companies who have not made an attempt to integrate digital transformation into their business strategy. Those who lag behind are being overtaken by disruptors who have taken hold of the competitive advantages provided by digital innovations to improve services and customer and employee experiences. What used to be a few concerned IT guys arguing for major updates or system overhauls are now established boards in most companies.

Now that digital transformation is a well-established priority where will we be headed in 2019? What is the current state of Digital Transformation? Here are three clear front runners.


But, here’s an example of a common attitude towards moving to cloud storage:

In 2018, a London branch of an international company stored many terabytes of very sensitive data on internal servers in London. The company headquarters called and asked about their recovery readiness (how quickly could the data be recovered in the case that it was lost?). The fresh data was backed up every week - this was not safe enough.

The London IT team hired a second server in Germany and began backing up every 6 seconds.

However, the question of cloud storage which would be easier, potentially cheaper, and likely more secure, never came up. Why?

Resistance to change is the third biggest factor that keeps companies from digital transformation according to IAA Global research. The company above was afraid its data wouldn’t be safe in cloud storage. However, major data breaches in the past few years have been from internal servers. This suggests that just because your data is stored on internal servers doesn’t necessarily mean it’s safer.

Cloud storage is likely to win trust in 2019 and play a huge part in shaping the state of Digital Transformation.

The amount of data created every day in 2019 is huge.

“over 2.5 quintillion bytes of data are created every single day, and it’s only going to grow from there. By 2020, it’s estimated that 1.7MB of data will be created every second for every person on earth.”

That’s a lot of data! But incredibly, only 1% of that data is being used.

Data is collected from the Internet of Things, which includes Amazon’s Alexa & Google Home, smart watches, and smart cars.

Data is created by research and scientific studies.

This all contributes to a huge amount of data that may not be used. This is the data swamp.

Here is where AI shines. The only chance we have of dredging the swamp and making something useful of all this data is if we harness AI to that purpose.

What if AI could scan through a patient’s medical reports and predict cancer before a doctor could?

This development is still in the future and is being worked towards, but we don’t have to wait for the future for AI to be in common use. A study by Spiceworks shows that 40% of large businesses will use intelligent assistants or chatbots by the end of 2019. Chatbot technology is freeing up employees to be retrained for other roles while AI is handling larger and larger amounts of customer service.

“X [anything] as a service” is booming. The flexibility, low costs, and benefits of these services are enabling ambitious startups to compete with the big guys and crusty companies to shake off the dust.

The first “as a service” was software. Some examples of Software as a Service are Microsoft Office 365, Adobe Creative Cloud, and Salesforce. These are well established “as a service” platforms that allow the product to be downloaded, updated, and accessed through the internet.

Since about 2016 the “as a service” format has been applied to many other sectors.

“IT as a service” brings in supplementary IT help when the problem is too complicated for the permanent IT team. It can also be used to free up the IT team from tricky time-consuming problems so they can work on the larger IT issues of the company.

“Capability as a Service” goes further. CaaS offers services like Business Architecture, Project Management, and Analysis. It achieves business objectives with ease-of-use that makes clients eager to get daunting projects done. For example, it’s easier to make the move to a cloud-based work environment when the transition is handled by a team of experts and without any permanent personnel changes. CaaS changes the game by bringing digital transformation to companies who otherwise wouldn’t have the resources.

Overall, a major strength of “As a Service” is its adaptability, which is why it will do well l in 2019.

Some companies are afraid of the hassle of integration or the uncertainty of fresh tech like Cloud Storage, AI, and Xaas. Others embrace the challenge and risks. However, what is right for one company may not be right for another. In the future robots may be making these decisions, but until then it’s up to you. Would your company benefit from a digital transformation strategy?